Aging and My Beauty Dilemma

Aging and My Beauty Dilemma 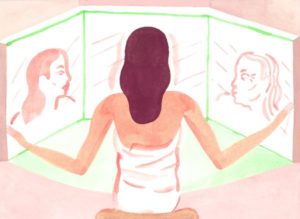 When I was 21, I underwent breast reduction surgery, reducing my embarrassingly large chest to something that could at least fit inside a cardigan. Although there some medical rationale for the procedure, the overwhelming reason was that I was sick and tired of every man on the planet being unable to look above my neck. Their fault, I know, not mine, and symptomatic of the baggage, both physical and psychological, women are forced to carry around with them. But once my own baggage was surgically removed, I felt amazing – lighter, prettier, healthier. Was this an indulgent move on my part? Maybe. Have I regretted it over the last 30 years? Not for a single moment. I had a problem, or at least what felt an awful lot like a problem. and I made it go away.

When it comes to aging, though, I’m torn. Because technically, growing older isn’t a problem; Mother Nature has it in for us all, reducing us to shriveled frames and crepey arms en route, eventually, to dust. And like most women in my liberal, feminist-leaning, highly educated peer group (I’m president of Barnard College in New York City), I am ideologically opposed to intervening in such a natural and inevitable process as simply getting on in years.

But like many of my peers, I am also a two-faced hypocrite, at least when it comes to parts of myself that may well benefit from a twinge of not-quite-so-natural intervention. Almost every woman I know colors her hair in some way, wether from a box or at a pricey salon. And these days, at least in Manhattan – and Los Angeles, London and even Paris, I suspect – many woman will quietly confess to a shot of Botox from time to time, or a dose of filler to soften their smiles. It’s after that point that things become dodgy. Brow lifts. Estrogen. Tummy tucks. Cellfina cellulite treatment. Is it all a slippery slope to some kind of Kardashian hell? Or, Like Propecia and Viagra – age-fighting interventions that men use and rarely take much criticism for – are they simply elements in a modern medicine chest, there for the picking? Does a little face-lift along the way constitute treason, or just a reasonable accommodation? I don’t know.

What I do know, though, is that for women in certain professional or social circles, the bar of normal keeps going up. There are virtually no wrinkles on Hollywood stars or on Broadway actors; ditto for female entrepreneurs or women in the news media. There are few wrinkles on the women in Congress and even fewer on Wall Street. Chief executives, bankers, hospital administrators, heads of public relations firms and publishing houses, lawyers, marketers, caterers: Certain standards of appearance have long been de rigueur for woman in these positions, from being reasonably fit and appropriately dressed to displaying attractive coifs and manicured nails. But more and more, these standards also now include being blond, dar- or red-haired and nearly wrinkle-free. Even Gloria Steinem, 82, and Marlo Thomas, 78, two icons of feminism, share not a brow crease nor an ounce of fat between them. Just saying no – to chemicals, peels, lasers and liposuction – becomes harder under these circumstances, even if no one wants to admit that’s the case.

What is more, as with so many issues that surround women and beauty and aging and sex, there is a paradox today that seems to strike women of the postfeminist generation with a particular force. In the bad old days – before women worked outside the home; before they lived much past their reproductive years; before there were Restylane and Juvederm, Radiesse and Sculptra – the idea of halting aging or fading in its tracks was only a fantasy. the stuff of Ponce de Leon and the fountain of youth. No one did anything about it, much less worried about the moral implications of doing so. But today, women facing the onslaught of middle age are armed with an arsenal of age-fighting implements and, for many, a feminist-inspired philosophy that disdains using them.

It is a trivial dilemma, perhaps, but a painful one nevertheless.  If a woman with some degree of professional success brags about or even comments upon her fabulous new filler or face-lift, she risks being derided as a traitor to the cause, someone silly enough to have spent the time and money to subject herself to an unnecessary, possible dangerous, procedure.  (When is the last time you heard a movie star tout her plastic surgeon? Or a leading executive thank her dermatologist?)  By the same token, if that woman ignores the process of aging and eases more honestly into her inevitable wrinkles, beely fat and gray hair, she is liable to stand out as anomaly within her personal and professional circles.  In political science, we would refer to this as a collective action dilemma: Everyone is better off if nobody tummy-tucks and uses Botox, but once anyone starts, it gets harder to pull back from the practice.

So instead, an entire generation of feminist and postfeminist women who stormed the barricades of the American work force, planned their reproductive destinies, and even got their partners to fold the laundry occasionally are now engaged in an odd sort of collective self-delusion.  Everyone (at least in certain high-profile or professional circles) is doing it, and very few are confessing, a fact that in some ways is more disturbing than the surge in the surgeries themselves.  Because not only are we nipping, suctioning and using hormones, but we’re also feeling embarrassed about it, and lying.  Neither of which was really the point of women’s liberation.

In South Korea today, one in every five women has had cosmetic surgery done, most to achieve the rounded eyes and larger breasts of K-pop idols.

In Brazil, even young and working-class women regularly invest their disposable income in tummy tucks and the country’s signature “butt lift”.

On a recent rainy night on the Upper East Side, I sidled into a friend’s annual party.  The room was packed, as it always is, with a particular subset of the city’s elite – the powerful women of a certain age, mostly from the news media and politics.  The  men wore Hermes ties and as much hair as they could muster.  The women were uniformly thin and dressed in short dresses, usually black.  A Clinton was spotted and appropriately fawned over.

I stayed for a while and mingled, gulping some wine and making hosts of hasty promises that had to do with lunches and white wine get-togethers.  Then my friend Elise pushed me toward the exit, where our husbands were waiting.  Elise is about a decade younger than me; she is alsoNordic, smooth-skinned and built like a ballerina. “Did you see that room?” she asked, smiling and rolling her eyes.  “Every other woman there was over 60 and yet there wasn’t a wrinkle to be found.  They all looked great,” she acknowledged, “but so similar!”

We ducked into the car and started heading back to the West Side.  In the darkness, she grabbed my arm. “Promise me that we”ll never do that,” she said.

“Do what?” I asked, pulling my own black dress more tightly around me.

“That plastic surgery thing,” she said.  “Fillers, Botox, all that stuff.”

I demurred, mumbling quietly, “Come back and see me when you’re 50.”

When you consult with Dr. Olson, you will collaboratively develop a personalized plan so you look like a better, fresher, healthier more vibrant you! Your face is not like everyone else and your treatment should not be either. When you choose a doctor with experience and training you will not get a cookbook copy of everyone else doing facial treatments…

HydraFacial MD Review : This Facial is Worth it!

What's the Newest Filler for Lips?