Microneedling: The Next Big Thing in Skin Care

Later, Lasers: Why Microneedling Is the Next Big Thing in Skin Care 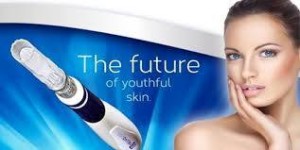 More often than not, the next hot thing in professional skin care tends to be just that: hot. From fractional lasers to radiofrequency devices and nearly every gadget in between, the reigning smoothing-and-tightening workhorses in derms’ offices rely on intensely high temperatures to jump-start wound healing and, thus, collagen production in the skin. But for the great many of us who can’t take the heat – as it flares up conditions like melasma and rosacea and can traumatize skin of color, causing it to darken unevenly – skin specialists are going back to basics. According to the American Society for Aesthetic Plastic Surgery, the number chemical peels are climbing – hello, peel bars – surpassing even those recorded at the peak of their popularity in the ’90s. But it’s a less ubiquitous old-school resurfacing method that’s gaining increasing buzz for those seeking smooth, radiant results without the stinging or flaking: microneedling – a technique that uses a needle-studded wand to drive tiny holes into the skin (potentially down to the dermis) with the goal of spurring collagen growth.

The procedure has been quietly advancing with the times, despite its crude beginnings. “When I first started needling in the ’80s, I was gripping a single 30-gauge needle with a hemostat [clamp] and poking the skin repeatedly to get at fine lines and acne scars – painstaking, but it worked,” says Cheryl Burgess, M.D., a dermatologist in Washington D.C. The automated stamping pens derms wield today make for far faster work, of course, and are considerably cheaper that the higher-tech alternative of fractional lasers, which create similar pinpoint channels in in the skin. (And not by coincidence: The technology was actually “patterned after the concept of needling,” says Burgess.)

Piercing the skin by any means can open one up to infection, so trust only a reputable derm or medical aesthetician with solid needling experience (and, it goes without saying, sterile tools). While some doctors do microneedling in lieu of laser work — especially for the heat-sensitive set — others perform the two in tandem. Denver dermatologist Joel Cohen, M.D., often uses microneedling as a low-downtime maintenance for Fraxel regulars who “want to help their skin stay smooth and taut in between laser sessions,” he says.

Further fueling the resurgent obsession with needling, Cohen notes, is the way it enhances the penetration of whichever hydrating, brightening, or rejuvenating actives are applied post-perforation. Microneedling enthusiast Mashell Tabe, and Albuquerque, New Mexico-based medical aesthetician who tends to Naomi Watts, believes so strongly in the treatment’s power to bolster product absorption.

“I want to scream it from the rooftops,” she says. “Done regularly, microneedling will make your skin act like it did in your 20s–it’ll be thicker, it’ll glow, it’ll have the most beautiful tone and texture.” And, really, what could be cooler than that?

Dr. Olson is the first and only to carry Daxxify in Baton Rouge, LA!

The first and only peptide powered FDA-approved anti-wrinkle treatment that lasts up to 6 months. What sets this neuromodulator apart from Botox, Dysport, Xeomin and Jeuveau is the duration of effectiveness (And it’s vegan, no human albumin).