Researchers found that across a wide variety of mammals, eyelashes are always about one-third as long as the eye is wide, the ideal length for diverting airflow around the eye and reducing evaporation.

Long and luxurious eyelashes have been in fashion at least since Cleopatra. But scientists now suggest that their real function is to help protect eyes from drying out.

David Hu at the Georgia Institute of Technology first decided to investigate eyelashes after seeing his newborn daughter bat hers three years ago. He enlisted graduate students in his biomechanics lab and colleagues to join the investigation.

They measured the lashes of different mammals, most of which have them. They made an artificial eye with lashes, put it in a wind tunnel and blew air at it. And they created mathematical models of airflow over lashes.

They found that across a wide variety of mammals, eyelashes are always about one-third as long as the eye is wide, which, it turns out, is the ideal length for diverting airflow around the eye and reducing evaporation. Dr. Hu, Guillermo J. Amador and several other researchers, all from Georgia Tech, published their findings Tuesday in the Journal of the Royal Society Interface.

Steven Vogel, a professor emeritus at Duke, who studies similar problems in biomechanics, said the research was “terrific.” Now, he said, “we know why eyelashes are the length they are.”

Frank Fish, a biologist at West Chester University who studies the movement of animals in water, also complimented the work. “What I like is that they have a number of approaches to help validate the ideas,” he said.

In the past, scientists have offered different explanations for the existence of eyelashes, including protecting the eye by catching dust as it settled from above, and acting as sensors to trigger blinking, which helps protect eyes and keep them lubricated.

And of course, in humans, lashes were also thought to have a role in sex and seduction, or, in biological terms, mating. All of these functions may be true, Dr. Hu said, but changing airflow around the eye is so important that, from elephants to rabbits, the proportion of lash length to eye width does not change.

The research began with measurements of eyelashes of 22 species of animals preserved at the American Museum of Natural History. Those measurements showed the constant relation to eye size.

Mathematical models of airflow showed that this length, one-third the width of the eye, should be the most efficient for diverting airflow. Wind tunnel experiments reinforced the conclusion.

The researchers used a dish of water the size of an eye, with a circle of mesh around it to mimic eyelashes. They first determined that the mesh functioned the same as false eyelashes made with human hair.

The actual length of mammalian eyelashes worked best to prevent evaporation of the water and to prevent the very small particles that air currents carry from landing on the water. If eyelashes are too long, Dr. Hu said, they channel air to the eye.

Apart from satisfying his curiosity, and providing a potential worry for wearers of long false eyelashes, Dr. Hu said the research might have some application to things like solar panels, which suffer from reduced efficiency when particles are deposited on them.

And it is, Dr. Vogel said, an example of what Dr. Hu does best. In the past, he and his students have studied the time it takes for mammals to empty their bladders, the physics of fire ants and the frequency at which wet dogs shake.

He has a talent, Dr. Vogel said, for “looking at what everybody has looked at, and seeing what nobody has seen.” 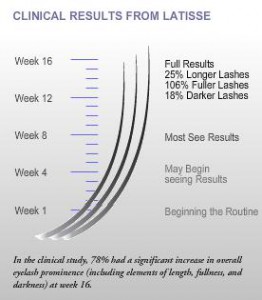 LATISSE™ works to stimulate growth from the lash follicles. You can expect to experience longer, fuller and darker eyelashes in as little as eight weeks, with full results in 16 weeks. A maintenance regimen can then be continued. In time, you’ll see the full effect of
LATISSE™ — and so will others.

LATISSE™ is a prescription medication which should only be provided by a qualified physician. After evaluation from Dr. Olson, she will safely and effectively prescribe Latisse for maximum results. Doctor Olson, an Ophthalmic Facial Plastic Surgeon and Board Certified Ophthalmologist, has extensive experience and knowledge in the care of the eyes. LATISSE™ (bimatoprost ophthalmic solution) 0.03% enhances eyelash prominence as measured by increases in length, thickness and darkness of lashes.

Dr. Olson is the first and only to carry Daxxify in Baton Rouge, LA!

The first and only peptide powered FDA-approved anti-wrinkle treatment that lasts up to 6 months. What sets this neuromodulator apart from Botox, Dysport, Xeomin and Jeuveau is the duration of effectiveness (And it’s vegan, no human albumin).